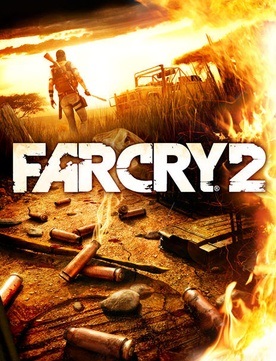 After finishing facing the mutants Far Cry 1story game franchise then switch to conflict There is a civil war going on in Africa.

it seems Ubisoft Know how frustrating I am when faced with
mutant exist Far Cry 1 game It’s hard to ask for forgiveness, so the concept of the story starts to change completely :v

yes, the game’s story Far Cry 2 It really has nothing to do with what’s inside Far Cry 1so you can play directly without having to know the story of the game game Before.

Far Cry 2 It has also become the forerunner to hold it Far Cry Series go through UbisoftNo Crytek who was the developer before Far Cry 1 game.

So for those who have played Far Cry 1you’re sure to find a lot of differences, both in terms of graphics and in terms of the various things inside
in the game.

outline, Far Cry 2 Game This is the same as Far Cry 1But I think that exists in game This is a good direction.

because, Far Cry 2 actually managed to show a open world game
It’s much more than reality Far Cry 1, Of course there are more improved graphics, and all kinds of new content in it.

I’m still thinking about it Far Cry 2 as Far Cry Game
the best Franchisebecause game It has unique features not found anywhere else Far Cry Series other.

So, what causes game Is this so interesting to you? Just take a look at the following comments​​:

Far Cry 2 The story of a mercenary who is sent to a part of the African continent to end a civil war between groups APR (People’s Resistance Alliance) and UFLL (United Front for Liberation and Labour).

It was the differences in understanding between the two groups that ultimately led to a never-ending conflict.It’s also made worse by the presence of someone with a nickname jackal They take advantage of being arms suppliers to both sides.

Well, you as the protagonist are assigned to seek and kill jackal end the conflict in the region.

Of course, the quest you get won’t be easy, because at the beginning of the story you play the main character who will contract malaria, so you will inevitably have to fight the disease throughout the story while looking for information about its whereabouts. Jackal.

story from Far Cry 2 It’s really complicated, but it’s also fun on the other hand.

why is that?because with game Here you will see all kinds of very exciting activities involve Happens in the real world, from how the conflict arises, starts to jockey for power, betrayal, negotiating efforts that both sides want to make.

All these complex conflicts are presented in game It got me interested in doing it over and over because there’s a lot to learn from the story rather than just focusing on the shots.

I mentioned above Far Cry 2 It has very unique features, some of which you can’t even find in the franchise Far Cry Game other. So, what are the features about it? game this? Check out the discussion below: 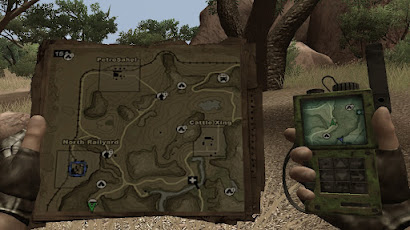 what can you do? explore a characteristic folder, at least the indicator in the upper corner of the screen is used to locate the task.Most people like this feature folder Exist in game other, but not Far Cry 2 Game
this.

do not like game other, folder Exist in Far Cry 2 Game Really held in the palm of the hand by the protagonist.

So, if you want to know where the mission location is, then you have to stick to it folder First in your hands.

More interestingly, while holding folder, you will not be able to shoot or attack enemies.So if you meet an enemy in the middle of the road, you have to save it first folderand switch to weapons.

The mechanics at first can really give you some trouble gamebut over time, this feature becomes addictive because you are able to identify the area inside folder will be more accurate and feel more challenging.

weapons did become spotlight mainly at first person shooterand in Far Cry 2 Game This mechanic is really meticulous, and the weapons you use for too long will rust and get stuck.

The moment you jam your weapon will be very impactful because when your weapon is jammed, you won’t be able to shoot the enemy.

If you are forced to use them, your weapon will not only jam, it will even explode.This can only be solved by changing weapons
stockif you don’t, be ready to get angry when you face the enemy.

a lot of player who ended up complaining about this feature, and finally the rusty weapon feature was deprecated Far Cry Game Next.

However, it seems to me that this feature makes Far Cry 2 Game It looks realistic because whether you like it or not, you have to make sure to update the weapon first so it doesn’t get stuck easily before going on a mission.

Apart from trying to find jackal, Your protagonist must also battle his malaria.

Just like in the real world, your character will also show symptoms like a human with malaria.

The most obvious example is when your character can’t run for very long, and if you keep forcing it, his vision will suddenly blur and his breathing will be short.

always game In the process, you will also encounter a few moments where the whole picture becomes weird, indicating that your character must take malaria medicine at this time.

Malaria medicines are also limited, so you have to perform a special task before you can be cured.

As the name suggests, partner It’s your friend who will help you later when you’re stressed out in battle. partner Usually only appears after your character is dead and in desperate need of help.

Besides, you can also complete tasks together partner for more familiarity.

However, you should also remember partner Just a normal support character who can die easily.

So, try not to be too far apart when you are together partnerbecause if he dies then you have to find someone else to replace him.

Various flora and fauna also have special interactions as you pass by. Some small plants look like they’ve been stepped on if you walk past them, and will snap branches if you shoot them.

Another very interesting detail game This is included in the animation of the fire spread that can spread widely depending on the wind direction.

For example, if you throw a Molotov cocktail in the middle of a piece of grass, the fire will slowly spread into the surrounding vegetation, burning the entire area, leaving only a barren black area.

It must be admitted that game It does have a level of realism that is above average for its era, and that gives me an experience while playing
Far Cry 2 Hard to forget.

as a lover open world FPS genre, What we can be sure of is Far Cry 2 Game I highly recommend this for you to play.This game does have more character than its realistic elements Open world first person shooter other.

so? How is it now?Are you ready to kill jackal And end the African civil war?

this is my discussion Far Cry 2 Game. If there is anything you want to add, just write it in the comments.

Don’t forget to visit often teh90blog.com Get other interesting information about the world game.